Yesterday Greta Thunberg shook the UN Climate Action Summit in New York. And on the same day announced that 16 youth from around the world “are petitioning the United Nations Committee on the Rights of the Child to hold five of the world’s leading economic powers accountable for inaction on the climate crisis.” And last week’s climate strikes were the largest ever, bringing over 4 million people into the streets around the world.

The world lately seems to have become an anti-dystopian, life-imitates-art era of promise.. does anyone remember the original Star Trek episode about a planet they visit where the adults are all gone and children have taken over? It was dark, and the children were Lord-of-the-flies-esque in their simplicity, need for play, and danger, as they assaulted the “grupps,” or grown-ups, with sticks and stones.

Instead, we live in a world where the adults insist on their need for play, refuse to grow up, and live in a dark Lord-of-the-flies-esque reality of their own creation, where dominating each other and their planet is so important they can’t see the cost.

And children are coming to our rescue. Here is a photo from yesterday’s Climate Action Summit in New York which will define the year, or perhaps even the decade that we are leaving; 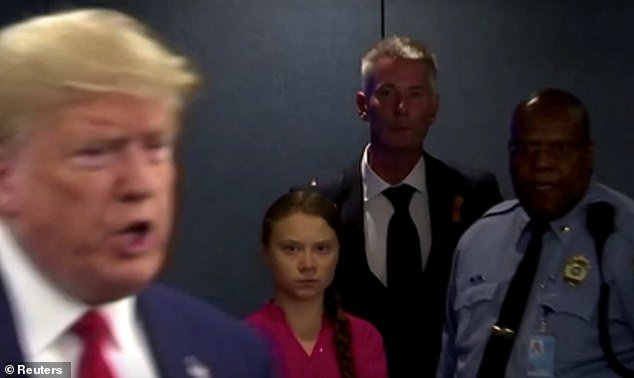 This picture sums it up. Trump is the ultimate entitled adult child – selfish, shortsighted, pointlessly competitive, delusional, and ultimately destructive, and as such is reflective of current adult generations. Thunberg is the opposite; calm, intense, brilliant, mature, clear-eyed, and a courageous voice of truth.

She is not alone. Youth all over the world are taking their governments to court. Environnement Jeunesse were recently turned down for a class action in Quebec, although there were some positives to the case, such as a statement that climate matters are not strictly political, and are justiciable by the courts (para 69-72).

At the same time the Juliana youth climate case continues to proceed in the USA, successfully getting over each procedural hurdle so far. And there are more youth climate cases, such as Sinnok v. Alaska, Martinez v. Colorado Oil & Gas Conservation Commission, Foster v. Washington Department of Ecology, Petition for Rulemaking to Limit North Carolina’s Carbon Dioxide Emissions, 4 Youth climate striker’s challenge of the Transmountain pipeline, and others.

Regarding the sci-fi episode we are in, in her earth-rattling short speech yesterday (text here) Thunberg confirmed her role as the mature lead-character  – leaving our role to be determined:

“You say you hear us and that you understand the urgency. But no matter how sad and angry I am, I do not want to believe that. Because if you really understood the situation and still kept on failing to act, then you would be evil. And that I refuse to believe.“

One thought on “And the children shall lead.. (in the streets, in court, at the UN)”